the rape of europa

has anyone seen this documentary? i got sucked in last night and couldn't take my eyes off the screen. look out for it on you local pbs station. see the trailer here.

The Rape of Europa tells the epic story of the systematic theft, deliberate destruction and miraculous survival of Europe’s art treasures during the Third Reich and the Second World War.

In a journey through seven countries, the film takes the audience into the violent whirlwind of fanaticism, greed, and warfare that threatened to wipe out the artistic heritage of Europe. For twelve long years, the Nazis looted and destroyed art on a scale unprecedented in history. But young art professionals as well as ordinary heroes, from truck drivers to department store clerks, fought back with an extraordinary effort to safeguard, rescue and return the millions of lost, hidden and stolen treasures.

The Rape of Europa begins and ends with the story of artist Gustav Klimt’s famed Gold Portrait, stolen from Viennese Jews in 1938 and now the most expensive painting ever sold.

Today, more than sixty years later, the legacy of this tragic history continues to play out as families of looted collectors recover major works of art, conservators repair battle damage, and nations fight over the fate of ill-gotten spoils of war.

the thoughts that give me the creeps

dabney's birthday was on sunday. poor thing was working in LA, but when she returned, she had received the best birthday card from her dad.

not only is it adorable, but he chose to portray us in the best light - thin and long-legged. the bottles of (what i presume is) beer in the wagon are a very life-like touch. :)

here's a new one from, our faves, the decemberists. the fact that it's about our old stomping grounds makes us feel a little homesick. sigh...

i got back from detroit late on sunday night. it was good. the show on saturday wasn't gangbusters, but i made a tidy profit and saw some fellow crafter-friends.

i had all day sunday before i had to depart for the airport, so i spent the day driving around detroit in the snow. yes, there was snow and it's only november.   as a result, my original plans of driving around with the aid of design*sponge's detroit guide had to be scrapped, as did my hunt for the lafayette park area featured in this month's dwell magazine. what to do on a nasty cold snowy day in a city you're not familiar with? head to a museum, and that's exactly what i did.

i spent most my 3+ hours in the detroit institute of arts inside michael graves-designed expansion that houses most of their contemporary art, where i was amazed by this life-sized motorcycle meticulously constructed of wood. (forgive me, dia, i didn't catch the artist's name). i was also particularly impressed with the special exhibit devoted paper artist jane hammond who works with rubber stamps, copy machines, silkscreens, etc. to create the most elaborate (and inspirational) collages.  this show made me swear to myself never to send another naked postcard.  embellishments will always be a must from now on.  i'll just have to travel with a glue stick and scissors.

i also spent an inordinate amount of time staring at the enormous murals of industry by diego rivera. he sure can pack a lot of symbolism into a work and if it weren't for the dia's free hi-tech handheld computer tours, i wouldn't have figured out an ounce of it. thank god for museum technology.  it turns out that rivera's masterpiece is not only a depiction of the power of technology and industry in american society but also a cautionary tale of its potential harm. yeah, i might have figured that out even without the computer, but what the hey...

while i am here this weekend:

dabney will be here:

mogo is in the december issue of country living magazine. now that the house/store has been stripped of everything (walls, floors, tile, etc.) it's easy to see its flaws. we had been warned that there would be some inevitably. the biggest being that the second story floor has a big hump in it. i think floors usually sink, but the steel beam that runs through the middle of our place did its job well while the rest of the house has settled around it over the last 100 years.

here you can almost see the rise. check out the ceiling and how the beam appears to be lifting the floor above. the answer? bring in a welder to cut down the columns two inches, and all will be well. beyond that, a couple of 1st floor joists are being replaced and then that's it as far as the structural stuff. in the scheme of things, it's really not that bad.

of course, all this floor leveling talk brings to mind an art installation i saw last weekend while in kansas city. hey, the kids think it's better than a slide.

a quick trip to kc, mo while dabney is away visiting her mom, i thought i'd go and check out more of missouri with a quick trip to kansas city to meet ron. it turns out kc is a great meeting point for us since its between omaha and st. louis.  honestly, he enticed me with the offer of driving me around all weekend and the promise of good bbq.

here's the evidence that he delivered on the latter. i had no idea hallmark is headquartered in kc, but a visit to the visitor's center, which happened to be near our hotel, set me straight on the card company's long history.  while there, we also determined that other than having the worst presidency in american history, george w. bush also managed to have the ugliest christmas cards of all the presidents. the kennedys had the most regal and classic, with the nixons coming in a close second. (sadly, i forgot to take a picture of the proof.) an evening of cocktails, drag queens, and people-watching was followed the next morning by a visit to the very impressive nelson-atkins museum, where i couldn't resist posing by a shuttlecock. several of claes oldenburg's giant fiberglass birdies dot the museum's grounds. i just love them.

the search for the first puppy

the obama girls are getting a new puppy. man, we're jealous. we're putting off a new pet until we're in our house. the wait is unbearable. every dog we see on the street... every pooch we see on tv... we can't help but stop and look. (do you know how many dogs there are on commercials these days?) when dabney is bored with craigslist, she is known to spend hours trolling petfinder.

and now, we can't stop watching this...

HALLELUJAH. change is in the air.

last night, we had the opportunity to celebrate obama's victory amongst our own. a kind new neighbor, and former schoolmate of mine, invited us over for an election night party.  we raised glasses of champagne and shot a handful of illegal fireworks in front of our house which just happens to be three doors down.  people stepped out onto their porches gleefully. cars honked emphatically.  it felt like new year's eve. dabney and i were reminded of the night the red sox reversed their 86 year curse and won the world series. missouri is undoubtedly a red state with tiny blue (and luckily heavily-populated blue) pockets.  despite our relocation to a batteground state, our two votes just wasn't enough to bring an obama victory.  as happy as i was with the overall national results, a part of me was sad that missouri, our new home, chose to be on the wrong side of history last night.  it was close and as i write this, it seems that no national network has called the state.  but it looks like mccain might have squeaked out a win.
Posted by annie-san at 5.11.08 No comments: voting is the coolest. 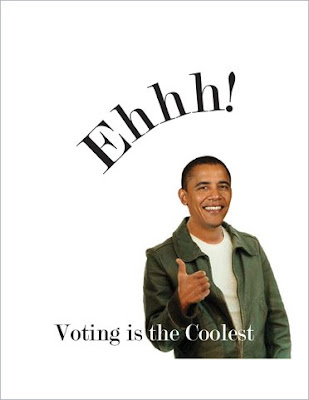 having occupied a basement for the past six years, we can barely contain our excitement...

High ceilings spur creative thinking, study finds. That's because people in a high-ceiling room are "primed" to think broadly because of the sense of freedom associated with the space... while the containment of a lower room encourages people to think small and focused. Read the article. (PDF)

via tallmatters
via swissmiss
Posted by annie-san at 3.11.08 No comments:

not that this has anything to do with the major issues at hand, but man, it's entertaining. when you have 10 minutes, go and check out new york magazine's "electopedia."

our first halloween in missouri and we wondered what the candy output would be like in my parents' neighborhood. well, here's the trick-or-treater count for the evening:
= for a grand total of 10

not much, but a good selection and certainly better than the south end where all we got was a handful of teens with paper bags on their heads.