superette will be on hiatus over the next two weeks while we head off to manila on our annual pilgrimage to spend some time with extended family, eat too much, and see some sites.

this year, we're adding a short side trip to pay a visit to a dear friend and her adorable family in singapore. we're so excited; a new country to conquer!

if we're lucky, we'll post some pics from the road.

if you're in the baltimore area, come check out the squidfire spring art mart on saturday, may 12th. click the ad below for details. too cool for school 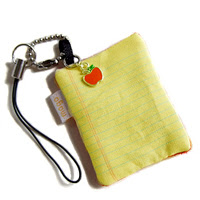 what's a new season without new products? it's a tougher question than you might think. we spend a lot of time tossing ideas back and forth.

here, we share a spin on one of our classics...

a special limited-edition cell phone cleaner made to look like notebook paper with an added apple to charm the teacher. to get your own, check out www.mogogoods.com. thank you all for the consoling comments, thoughtful emails, kind blog posts, and sweet gifts. your friendship has been comforting and helpful. we send a virtual hug back to all of you. people that only knew feidler late in life would never guess that he was a holy terror as a young dog, and a big pain in the ass. beware anything in his path. he constantly lunged at me for attention, or whined to go outside. i once caught him by the pond with a whole frog in his mouth, two long green legs dangling from his lips. another afternoon, i spent a full hour chasing him while he pranced, proudly, around the yard with an entire deer leg in his mouth. where he got that raw, bloody leg I have no idea. his crowning glory (probably the happiest day of his life) was chasing 28 turkeys to death – literally, to death – at a neighboring farm. i have spent at least $4,000 on surgeries alone to remove rocks, water chestnuts and other foreign objects from his stomach.

i won’t lie and say i wasn’t relieved when he mellowed out and stopped yanking me down the sidewalks on our walks. he became an overwhelmingly sweet and peaceful dog. a 65-pound lap dog with no business being on your lap. he’s a leaner. he loves anything that squeaks. he would spend entire life in the water if he could. he has never, to my knowledge, fetched a ball. as he aged, he became a bonafied old man, passing gas with any effort, and clicking his teeth like dentures. i have a thousand nicknames for him including mr. pooper, poops, rump roast, mud flap, bug, and - when he’s really pissy - commander dickweed. he has lots of people who love him. when i drove to bradford, vermont almost fifteen years ago, i wasn't expecting to come home with a puppy that evening. but something about the way he nibbled on my socked feet, and his little peaked head, sold me on 15 years with him, even before I had the slightest inkling that it would mean 15 years with him, with poop and pee and, apparently, a lot of dead animals and their parts. today is the day i have been dreading for a long time. feidler, who has long been an old dog, is now a decidedly sick dog. we've done our best to make him comfortable and happy. in the past four months, this has meant giving him sub-cutaneous fluids twice a week, waking up multiple times throughout the night to let him out, and constantly weighing quality of life for an arthritic dog with kidney failure that can no longer tell you what he wants or needs. now though, he's all but quit eating, which was, for me, always the deal breaker. it also twists my heart in improbable ways when my little dog no longer knows me, or his annie. so, i know, it's time. i have experienced sudden death in my family, but not the experience of anticipating death. so i am incredibly grateful to have these weeks with feidler. to have ann photograph me giving him what I knew was his last bath, and to be able to write this while he stumbles past me like a drunken sailor on his way home from the bar. to have the benefit of a vet telling me what to expect, and how it will go, feels like a luxury. it gives me a small but significant fingerhold in this process, instead of a quick snap and sudden call to cope.

when my brother died in 1996, i couldn’t compartmentalize his absence, like the well-defined hole you read about or are somehow taught to expect. it brought my relationship with him, my parents, their relationship- what felt like my entire life at the time- into question. i was a depressed 24-year-old, just out of college, whose sense of herself was as infirm as pudding, and whose relationships were even more so. so i was ill-equipped to reevaluate everything than came with such a comprehensive loss. admittedly, feidler walks in smaller circles, touching fewer lives in less complicated ways. and i am happier and more stable than ever. what i do know, at this moment in my life, having had him for almost half my life, is that he’s the closest i come to being a mom. i say that even as someone who was never sure that she wanted to be a mom. i never get tired of looking at his face and at his monstrously large paws. i know every inch of his little body. i can say unequivocally that caring for him has made me a better person, and i am equally sure that i needed to be a better person. i know i have done well. he’s probably the best thing that i’ve ever done. and to experience a life, through him, without regret, is one of the most simple and solid feelings I now know. last night we gave feidler a buffet of dog cookies, beef jerky, and tendons and then spent the night with him on the floor. he got a massage and, all things considered, had a pretty good night.

superette will be dark this week, but we'll post lots of photos.

complete with navigation buttons, a new homepage... sure, mogogoods.com got an updated look but the real changes are "under the hood." it's an overdue and much needed change that will make it easier for us to add products as we whip them up. it's bound to make ann's life in particular much, much, much, much easier. take a look and let us know what you think. and this is the time to alert us of any problems that you see, from typos to missing links...
Posted by ann & dabney at 3.4.07 3 comments: i just rediscovered the joy of spinning wheels and loop de loops, a.k.a. hypotrochoids and epitrochoids for you math heads out there. here is my first attempt: next up: i have to get my hands on a set of fashion plates, one of my favorite toys as a kid.