the babies aren't bad looking either.

thanks to sarah and jill for the photo of their absolutely adorable sons wearing mogo goods. charlie's got the blue berries on, and max models the paper airplane. as ann and dabney mentioned earlier, they flew to a part of philippines - palawan - that they had never been to before. here is their group on the small propeller plane they took to get there. only 2 people felt airsick. ann's cousins are very pretty, even when they're nauseous. when they arrived at their destination, they thought that this might be where they are sleeping. nice, huh? the photo doesn't do it justice. instead, here is their hut. note: the luxury ocean bungalows don't come with their own shrine. for some reason, ann always looked a little puffy after snorkeling. dabney always had the large oval "snorkeler's crease." ann in a palm hat. while there, dabney learned how to make various animals out of palm fronds: angel fish, ducks, crabs, and grasshoppers. dab couldn't bear to throw them away (even though they got very brown and beat up on the way home), so ann did it when she wasn't looking. virgin mary - uh, ann - in vigan, a town in northern luzon that featured a lot of spanish colonial architecture. the week after they were there, many of the old houses were damaged from a typhoon and subsequent flooding. one of the many, many churches they visited. ann's mom heading to the water in cabugao. ann watching the sunset with her sister in her favorite attire... a muumuu (also called a duster in the philippines). while in manila, dabney, ann's sister, and mom decided to get their hair done. you should have seen the photo that ann wanted to take of dabney (in ones of those strange rubber caps that they pull clumps of your hair through in order to highlight). if you had seen her, you would understand why dabney hellraiser wouldn't let that happen. this is ann's dad who finally succumbed and allowed his daughter to select a new pair of glasses for him. he wasn't sure what he thought of them until all the female staff gathered around and told him he looked ten years younger. he ended up buying two pairs. in bangkok, ann and dabney found a hip store called playground. those puffy pods were great to sit in, HARD to get out of. in northern thailand, they enjoyed a guy's lovely and sweet animal carvings. ann's strategy for beating the heat was to drink heaps of iced coffee. needless to say, she was bouncing off the walls afterwards. on the southern island of koh island, a & d took a break from their motor scooter and enjoyed some fresh fruit shakes and this view. in the last week of their trip, there was much scrabble to be played. and let it be noted that ann did not win once. not once. back to normal (and jet lag-free) blogging on monday... after near 72 hours of traveling -- that included flights from krabi to bangkok, bangkok to manila, manila to nagoya, nagoya to detroit, and finally detroit to boston -- ann and dabney safely arrived stateside on saturday to stacks of mail and drifts of dust that had all settled in their apartment over the last five weeks. now, their real battle begins; it's ann and dabney versus monster Jet Lag.

round 1: ann and dabney hit the ground running and combatted drowsiness on saturday night until they could literally stand no longer (just about 9:00 pm). they awoke at 7:00 am - not bad considering their previous 24 hours had consisted of restless magazine flipping and bad movies, not to mention numb bums. round 1 goes to a and d. just when they think they have it licked. round 2: a huge JL victory. JL unleashed its fury at 6:00 pm on sunday. attacking them just when they're most vulnerable - while catching up on missed american idol episodes that their tivo had amassed during their long absence. with taylor hicks singing in the background, ann nods off until 10. sadly, dabney doesn't shows signs of life until midnight.

now, it's 2 am and what better thing to do than surf the 'net and catch up on all their favorite blogs and websites?

so happy to have a mac back in their hands, ann quickly visited the itunes music store just to see what was new. and lo and behold, chris and keith (a.k.a. fred flare), the two gods that had just christened mogo as "the next big thing" have released their totally entertaining, completely hilarious video podcast. if you have itunes installed on your computer and a broadband connection, ann and dabney urge you to check it out. they're still giggling about ff's roller coaster cam. silliness aside, a video podcast by online retailers - it's a breakthrough in advertising really... it's the dawning of adutainment- the fred flare show.

in the aftermath of mogo's next big thing debut, ann and dabney discovered they were featured in a couple surprising places.
modish- a fantastic indie style blog.
platinum blonde life- a guide to living fabulously.
and one girl who could write a book on fabulousness - ashbloemstraat

and just when they thought no more free publicity could come their way, pica informed them that mogo had made the front cover of etsy. how exciting!

ann and dabney are so happy to announce that mogo is one of the winners of fred flare's NEXT BIG THING contest! they are so honored to be among so many talented people. check out the other winners at fred flare.

ann and dabney wrote a really long blog entry on paper while they were in northern thailand last week, but it's in the hut up the hill (which they have called home for the past three days) and they are too sweaty to go retrieve it. so this will have to do.

after three long weeks, ann and dabney finally left manila for bangkok. although excited about thailand, they were mostly happy to just leave the van with ann's family in it. they heard from ann's sister that the family took another long drive south of manila, and a & d were SO happy they got on a flight that day instead of joining them. it sounded brutal.

having seen a lot of bangkok's famous sites (grand palace, wat pho, jim thompson's house) during their 2004 trip, they felt at leisure to wander around, return to some of their favorite places, and find some new ones.

they spent the first weekend doing (very) early x-mas shopping at chatuchak market. the market is great in that there are a lot of different things that you don't see at the normal tourist stalls around the city - they wish boston had something similar to give small businesses a chance to sell their goods (ahem, like mogo), without the huge overhead. if they could have bought about 50 t-shirts there, they would have. as it was, their bags and wallets only allowed them four really cute ones. should ann and dabney ever decide to become buyers, or own a store themselves, they would head straight to thailand.

besides the hospitality, gorgeous scenery, food, ice coffee, and fruit shakes, ann and dabney's favorite thing about thailand in general is undoubtedly the thai massage. only half way through their stay they'd already had three, one of which was two hours long. ahh, the sweet release. dabney cried afterwards, as she tends to do.

they then headed to chiang mai, part of northern thailand. sadly, it was no less hot there and a & d spent their days in pools of sweat while walking around and guzzling icy drinks. in such a traditional old city, it was interesting that there is so much modern design cropping up, mostly in the form of shops. in additional to the usual cluster of wats and museums, they also took a half-day trip outside the city to visit makers of silk, lacquer and jewelry. as crafty people themselves, it was interesting if not touristy.

ann and dabney are now in the south, on the lovely island of koh lanta. the fact that it's off-season, and a less popular destination, makes them one of the few people staying here. they've alternated their time between the pool and the ocean, which isn't a bad way to spend one's days. today though they decided to take some time out from the sun altogether, as yesterday both of them wound up a little to red for their liking (and believe them, it takes a lot of sun to get ann an actual red color. usually she progresses straight from tan to ashy grey to black.)

tomorrow, they are thinking about renting a motorbike and exploring the rest of the island, if only to feel the wind on their faces and to give ann a shot of nostalgia in her arm for her long lost scooter.
Posted by ann & dabney at 12.5.06 3 comments:

though ann and dabney are far from home they just learned that they will be participating in the annual art star craft bazaar in philadelphia this june (thanks to rebecca from bakesale designs for the word). if you're in philly on june 4-5, please come by and say hello. 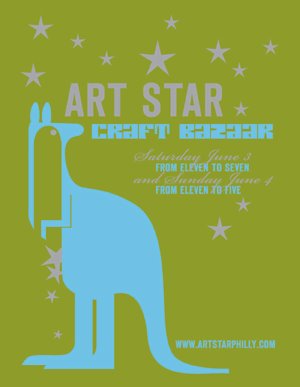